Saving the Ghost of the Mountain:
An Expedition Among Snow Leopards in Mongolia
Houghton Mifflin Harcourt (HMH), September 2009

People call it “The Ghost of the Mountain,” for those who live among snow leopards almost never see one. Beautiful spotted coats conceal these elusive cats in their rocky, high-altitude habitat-a place where temperatures are often cold enough to freeze human tears. A thick, long tail for balance helps snow leopards spring at their prey from great distances-prey that is often three times its own size. Slinking along the Mongolian mountain ridges, the snow leopards are invisible-and almost impossible to study. 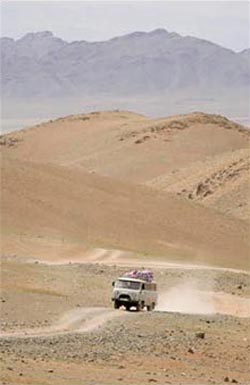 But that doesn’t deter scientist Tom McCarthy, Conservation Director of the Seattle-based Snow Leopard Trust, or his many colleagues from dedicating their lives’ work to the study and protection of this seldom-seen creature. And it doesn’t stop Sy Montgomery and Nic Bishop from packing their bags in order to join Tom on a trek to Mongolia, where they hope to learn more about this magical cat, a cat who doesn’t give up its secrets easily. It will take endurance and persistence to climb the dusty mountain trails, hope of a snow leopard sighting rising and falling with each new summit. It will take practice and experience to lay humane leghold snares, collect scat samples, and set up motion-triggered cameras. It will take patience, focus—and yes, love—to dedicate a lifetime learning more about this little-understood creature. But that’s the only way the Snow Leopard Trust can protect their charges, before the snow leopard truly becomes nothing but a ghost of the mountain.

With a dazzling, as-it-happens narrative and spectacular photographs, Sy Montgomery and Nic Bishop bring Mongolia up close for readers everywhere.