Chapter 1: The Strangest Parrot in the World

It’s hours past midnight. You’d think any self-respecting parrot would be asleep. But not Lisa.

No, despite the late hour, this huge, soft, moss-green bird, looking somewhat like a parakeet who has eaten one side of the mushroom in Alice in Wonderland and grown into an eight-pound giant, decides this is a great time to waddle out of her nest—a nest that’s not in a tree, like a normal parrot’s, but underground.

Reaching the surface, she begins her nightly explorations of the forest. Does she take off and soar from tree to tree? No—this bird travels only on foot. Even though her wings are healthy, she can’t fly. Tonight, she’ll thrash noisily through the underbrush in the dark, looking for food. She’ll sleep hidden from view during the day.

Is Lisa a winged wierdo? A psycho-parrot? No, everything she’s doing is perfectly normal—for a kakapo (KAR-ka-poe), that is. Found only in New Zealand, the kakapo is the rarest parrot, the heaviest parrot, the only flightless parrot, the only night-active parrot, and undoubtedly the strangest parrot in the world.

But what happens tonight in a nearby tent is stranger still.

Few tents come equipped with doorbells, but this one does. It sounds inside the tent the second that Lisa crosses an infa-red beam as she leaves her nest. Scientists set up the contraption to ensure that the two sleepy women in the tent are awakened each time Lisa leaves the nest. The time has come for them to do a very important job. The two volunteers are “nest minders”—sort of like nannies. They’re nannies for an extraordinary baby.

As Lisa forages, she leaves behind a single, blind, downy chick. Unlike familiar birds such as robins, kakapo moms and dads don’t raise their babies together. But Lisa’s got plenty of help. Fifty yards from the nest, the two campers wriggle out of their sleeping bags and tug on pants, boots, warm jackets and hats. Guided by flashlights, they make their way to the nest in the dark. Their mission? To place a warm blanket over the chick—so it won’t get chilled while Mama looks for food. 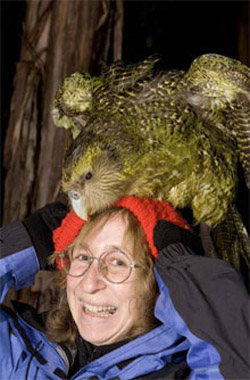 The helpless, white baby is precious beyond measure. It is the only kakapo chick in the world right now—one of only eighty-seven kakapos on the planet.

Though they used to be common all over New Zealand, kakapos now live only on two small islands off New Zealand’s southern coast. That’s why we’ve come here to windswept Codfish Island, a cliffy, forest-clad, five-square-mile speck of land just twenty degrees north of Antarctica. This is the kakapo’s only breeding area—the non-breeders have all been taken to an island called Anchor. The entire human population of Codfish—fourteen of us at the moment—is here working toward the same goal: to help save the kakapo from extinction. And we are hoping that any day now, there will be 88 kakapos, 89 kakapos…and maybe even more.

We could not have come at a more exciting moment. Kakapos don’t breed every year. They don’t even breed every other year. In fact, no one can predict with certainty when they’ll breed at all. So much about this strange bird is a mystery.

Few people ever get to see a kakapo. Not even volunteers who come to Codfish year after year. You can hike the island all day long and never see a kakapo—they’re all asleep. Volunteer nest-minders often wait for years to get the call they’ll be needed.

The special forest rangers here, known as Kakapo Protection Officers, and the technical support officers—all part of New Zealand’s National Kakapo Recovery Team—are very excited. This is shaping up to be the most important season in some of the rangers’ entire careers. I have been waiting five years to write the words in this book for you, and photographer Nic Bishop has been waiting just as long to bring you these pictures. 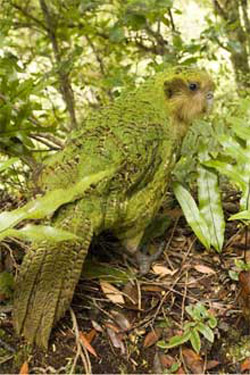 We could not have imagined a more strange or beautiful place. We’re visitors in a topsy-turvy world, where everything seems upside down: though March is spring in North America, in New Zealand, it’s autumn. On Codfish Island, birds nest in fall, wild creatures seem tame, parrots don’t fly, and night is as busy as day. In the dark, the forest seems magical, full of mosses, ferns and moonlight, alive with sounds like bells and flutes, pops and buzzes-the voices of birds and bats who travel and sing at night, like mischievous goblins.

But even in this enchanted setting, we’re in a race against time. We could be witness to one of the most thrilling conservation success stories in human history—or one of its most noble but tragic failures.

This March, the future of the species is cradled in two nests, three incubators, and the hearts and hands of the kakapo-loving humans who’ve come from around the world to help.

After all, we owe it to the bird. For it was our kind that nearly wiped it out in the first place.