The grass is the color of lions. If the big cats weren’t lying so close to the road, they’d be invisible. Thick manes frame two massive heads, marking them as adult males; the third is a lioness. Though their yellow eyes seem as indifferent as the sun, they are probably watching the same thing we are: a herd of fifty wildebeests about 300 yards away from our Land Cruiser.

“If the lions notice the lost calf, they might become active,” says wildlife biologist Dick Estes, the leader of our safari. But when one of the lions rises, it’s a different drive he seeks to satisfy. He saunters over to the female and straddles her. He gives a few thrusts with his hips, but after five seconds, he gives up.

“I don’t think they got it on,” comments Liz Thomas. As a teen, she lived among lions in Namibia, and knows that lion lovemaking typically lasts longer than that—and ends with a swat and a snarl from the lioness. That’s for good reason. The male has tiny barbs on his penis, and when he pulls out, it hurts the female.

But this lioness doesn’t grumble. She flips over on her back, legs folded in the air, playful in the way of a sleepy puppy. The male returns to his other companion, who is probably his brother. He lies back down. 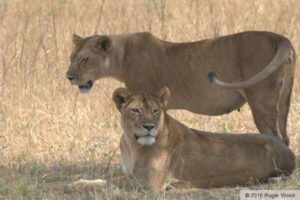 For now, the action is over. But other safari vehicles begin to gather. Lions are one of Africa’s “Big Five” (the others are elephant, rhino, Cape buffalo, and leopard) that big game hunters once sought as trophies, and that most tourists want to see today. Soon eleven cars are idling by the road.

“This is my nightmare,” says Dick. “A crowd of vehicles watching lions do nothing, ignoring all the REAL excitement!”

Just past the lazing lions, the fifty wildebeest are engaged in dramas of life and death. They are advertising territory. They’re seeking mates. They’re finding the food that they need to sustain them on one of the greatest animal journeys on earth.

The lost calf reunites with his mother and rushes to her udder to suckle. A young bull chases a rival, whose right horn was broken in combat. “There’s so much going on!” says Dick.

But not many people know how to see it.

Dick does—and that’s why we’re here. My friend of thirty years, Dr. Richard Despard Estes has been studying these powerful, high-shouldered, bearded antelopes for more than half a century, longer than any other scientist who has ever lived.

From his white beard to his bush hat to his twinkling blue eyes, Dick looks as if he stepped out of Central Casting for the part of African wildlife biologist. The undisputed “Guru of Gnu,” he’s acknowledged the world over as the top expert on wildebeest. And though lions may seem more glamorous, it’s wildebeests who drive the ecology and evolution of the largest savannah ecosystem in the world. 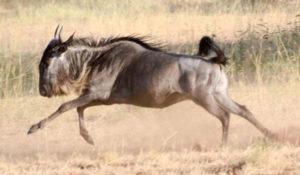 Like no other event in nature, the wildebeest migration defines wild Africa.

The extravagance of their number stupefies: one and a quarter million wildebeests, in separate herds of tens of thousands, all on the move at once, accompanied by hundreds of thousands of zebras and gazelles. It is the largest mass movement of animals on land.

The sheer number of so many animals in motion is more than a dazzling spectacle. It is a force like gravity, or rainfall—a force that transforms, nourishes and renews both the lands over which they travel and the other creatures who gather in their wake.

The movements of the wildebeests are described in terms normally reserved for oceans or weather systems: They storm across rivers and lakes, dodging the jaws of crocodiles. Waterfalls of wildebeests tumble down cliffs. They pour into the greening plains. They follow the rains and the nourishing grasses in a roughly clockwise route of nearly a thousand miles, from Tanzania to Kenya, year-round. On their journey, they collect an unrivalled entourage of 200,000 zebras, 500,000 Thompson’s gazelles, 18,000 elands, 97,000 topi—as well as the host of lions, leopards, jackals, hyenas and vultures who eagerly await their arrival in their home territories. 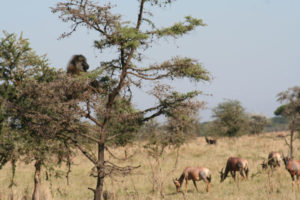 “This is the greatest of all mammalian migrations,” Dick told me. “To be part of something that huge is an amazing feeling.” And this is the quest that has drawn us here, on this Friday in late June, to Tanzania’s Ngorogoro Crater. This is the gateway to Africa’s great Serengeti Plains, and part of the vast Serengeti-Masai Mara ecosystem of roughly 25,000 square miles—the size of Connecticut and Rhode Island combined.

Our party of five has come from across the U.S. to join Dick, 88, on what could be his last safari. We’ve come in hopes of finding the massive herds. We want to observe them during the wildebeest’s chaotic and dramatic rut, or mating season. We hope to join them in taking part in the world’s most magnificent animal migration. 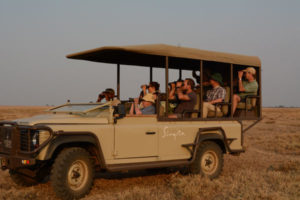 “See that male?” Dick says, pointing to a tall, noble-looking young bull. The fringe of the gnu’s long beard is backlit like spun gold in the morning sun. “His head is up. He’s not just standing around. He’s doing three things: he’s chewing the cud. He’s watching for females and rival males. And he’s advertising his territory.”

Now, through his binoculars, Dick spots another, larger herd—perhaps several hundred animals. It’s just a five-minute drive away from the cars still clotting around the lions. “Hot damn!” Dick says. We drive on.