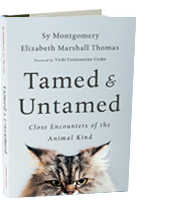 The electric eel exhibit at New England Aquarium has a feature that makes it a favorite. Whenever the eel is hunting or stunning prey, the charge powers a voltmeter above his tank. It lights up when the eel is using his electricity, and allows you to see the invisible — like magic.

One day I saw another magical thing happen in the tank. Thanks to the voltmeter, I was able to watch the eel dream.

I was standing in front of the exhibit with Scott Dowd, the lead aquarist for the freshwater gallery, watching the eel resting motionless at the bottom of the tank.

“I think he’s asleep,” I said to my companion.

“Yes, that eel is catching some serious Zs,” he agreed.

Being hard-core fish enthusiasts, we continued to watch transfixed while the electric eel slept. And that’s when it happened: A big flash shot across the voltmeter display — and another, and another.

Electric eels hunt while swimming forward, wagging their heads to and fro, sending out electric signals that bounce back to them, sort of like a dolphin’s echolocation. But he was still motionless. So what was the flash for?

“I thought the eel was asleep!” I said to Dowd.

“He is asleep,” he replied.

We realized at once what we were almost surely witnessing. The electric eel was dreaming.

“It would appear that not only do men dream,” Aristotle wrote in “History of Animals,” “but horses also, and dogs, and oxen; aye, and sheep and goats. . . .” It was obvious: like most of us, Aristotle had watched sleeping dogs twitch their ears, paddle their paws, and bark in their sleep. Surely other animals dreamed as well.

But since Artistotle’s day, more “modern” thinkers denied that animals could dream. Complex and mysterious, dreams were considered the exclusive province of so-called “higher minds.”

As brain research advanced, however, researchers were forced to concede that Aristotle was right. Animals do dream. And now we are even able to glimpse what they dream about.

A researcher who studied zebra finches found that while awake, neurons in the forebrain fire when they sing particular notes. While the birds were asleep, he found that their neurons fired in the same order — as if they were singing in their dreams.

Since the 1960s, scientists have understood that our dreams happen during the Rapid Eye Movement (REM) phase of the sleep cycle. During this time, our muscles are normally paralyzed by the pons of the brainstem, so that we don’t act out our dreams. In 1965, researchers removed the pons from the brainstems of cats. They discovered the cats would get up and walk around, move the head as if to follow prey, and pounce as if on invisible mice — all while asleep.

By 2007, we would get an even more vivid picture of animals’ dreams. Massachusetts Institute of Technology scientists Matthew Wilson and graduate student Louise Kenway recorded the activity of rats’ brains while the animals were running a maze. Neurons fire in distinct patterns while a rat in a maze performs particular tasks. The researchers repeatedly saw the exact same patterns reproduced while the rats slept — and they saw this so clearly they could tell what point in the maze the rat was dreaming about, and whether an individual rat was running or walking in his dreams.

The rats’ dreams arose from the hippocampus, the same area in the brain that seems to drive humans’ dreams. It’s an area known to record and store memories, and further supports the notion that one important function of dreams is to help us remember what we have learned.

And of course, it’s important to a lab rat to remember the right way to run a maze. So if rats dream of running mazes, what do birds dream about?

University of Chicago professor Daniel Margoliash conducted experiments on zebra finches. Like all birds, zebra finches aren’t born knowing their songs; they learn them, and young birds spend much of their days learning and rehearsing the song of their species. While awake, neurons in the forebrain known as the robustus archistrialis fire when the bird sings particular notes. The researcher was able to determine the individual notes based on the firing pattern of the neurons. While the birds were asleep, their neurons fired in the same order — as if they were singing in their dreams.

Much less work has been done on fish than on mammals and birds. No one has found REM sleep in fish — yet. But that does not mean they don’t dream. Interestingly, no one has discovered REM sleep in whales, either. But whales almost surely dream. They are long-lived, social animals with very big brains much like our own, and for whom long-term memory consolidation is crucial. And if you were looking for rapid eye movement in sleeping owls, you’d never see it — because owls’ eyes are fixed in their sockets. That’s why they need to turn their heads around, Exorcist-style. Yet owls’ brain waves show they dream, too.

Fish do sleep, however — that much is well known. And it’s been carefully documented that if zebra fish are deprived of sleep (because pesky researchers keep waking them up), they have trouble swimming the next day — just as a person would have trouble concentrating after a dreamless night.

What might an electric eel dream about? The voltmeter at New England Aquarium showed us the answer: hunting and shocking prey.