The Octopus Scientists:
Exploring the Mind of a Mollusk
(Scientists in the Field Series)
HMH Books for Young Readers, ISBN 0544232704

An international team of scientists with varied focuses work together on a remote South Pacific island to study octopus behaviors.

Two weeks on Moorea, in French Polynesia, snorkeling and diving around the reefs off the coast, admiring the abundant life, and learning about octopuses. What could be nicer? In her latest observation of scientific fieldwork, Montgomery doesn’t ignore the downside—there’s more searching than studying, here, and it’s often physically uncomfortable—but she dwells on the joys of admiring the endless variety in the underwater world and learning about these reclusive, intelligent, surprising creatures. With ease that comes from long practice, she weaves a narrative full of fascinating detail, helpful comparisons, direct quotations, and personal reactions that bring readers into the experience. Chapters of action, with smoothly integrated explanatory background, are interspersed with informative passages about octopuses, the field station, and coral reefs. She describes the team’s daily explorations in the water and their inside lab work, identifying the food remains they’ve collected from neat piles outside the octopuses’ dens. This is an account of a successful expedition, although it raises more questions than it answers. “The field is about serendipity,” expedition leader Jennifer Mather reminds readers. Amazing photographs reveal the octopuses’ remarkable shape-changing abilities and help readers visualize this experience. 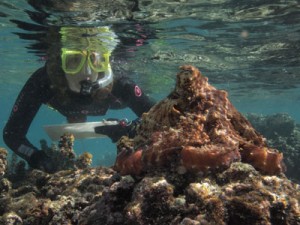 Science in the field at its best. (Nonfiction. 10-16)
— Kirkus Reviews

The French Polynesian island region of Moorea is home to the Pacific day octopus and to a research center that serves as home base for four scientists who study the species. Montgomery tags along with the team, which is interested not just in the anatomy and environments of these mollusks but also in their psychology: the scientists wish to study the decision-making of octopuses as they avoid predators and choose food and shelter. To do so, they first have to find the octopuses, a difficult task that takes up much of the book, as octopuses employ an array of defense mechanisms to keep themselves hidden. Once found, though, Montgomery explains the detailed, careful methods the scientists employ to collect data about the octopuses and the remnant shells of the animals they consume, surveying every meter of the areas of each octopus sighting. Along the way, Montgomery describes all aspects of life in the field, including the personalities and quirks of the scientists and the joys of working in a beautiful tropical locale. Abundant stunningly clear underwater photographs highlight the colorful details of a range of marine species—including sea cucumbers, sharks, fish, rays, and eels as well as the octopuses. A bibliography and index are appended.
— The Horn Book

Through sharply crafted text, Montgomery shares her enthusiasm with readers, and Ellenbogen’s vibrant color photos allow a crystalline window into a very special environment. This glimpse into an alien world and mind combines biology and psychology: an exciting pairing. Another enticing entry in a series devoted to highlighting enthusiastic scientists hard at work in the fields they love
— School Library Journal (Starred review)

The reliably informative and entertaining Montgomery is off on another Scientists in the Field adventure, this time tracking Dr. Jennifer Mather and a research team on the island of Moorea, near Tahiti, where they hope to study the elusive octopus. They’ll need to find two habitats in order to establish comparisons, and considering Montgomery’s two-week time limit, they’ll need to find them promptly. It’s just this sort of consideration that makes this series so intriguing: science doesn’t operate on a publishing schedule, and octopuses don’t share the author’s sense of urgency.

And so, while quietly stressing about whether she’ll get to see an octopus, and noting the irony of passing by myriad marine wonders in rushed pursuit of her quarry, Montgomery explores why the octopus is so very difficult to study. The relatively shallow waters in which they live are challenging, rife with poisonous sea life and skin-lacerating corals and algae. Mostly, though, it’s the nature of the beast itself, a boneless master of camouflage that changes color and skin texture in a fraction of a second and slips through improbably tiny holes to hide.

The team does, thankfully, find octopuses before Montgomery’s departure, and it not only inventories their post-prandial trash heaps but also administers interactive tests that Dr. Mather has devised to assess individual octopus personalities. Each chapter of triple-columned text is heavily illustrated with photographs taken on site and includes two or more pages of related information on the scientists, the CRIOBE (Le Centre de Recherches Insulaires et Observatoire de l’Environnement de Polynésie Française) research facility, and octopus physiology and behavior. An index and selected bibliography are included.
— Bulletin of the Center for Children’s Books

Recommended for readers of all ages, especially elementary school children (in the upper elementary grades) since it can get them excited about life and marine science. Sy Montgomery proves that she is a gifted author who gets better with each and every book that she writes. This book on octopuses is well-written and extremely well-researched. It garners an A rating.
— Hellenic News of America