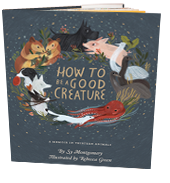 One of the most poetic science writers of our time.
—Maria Popova, Brain Pickings

In a memoir that will speak to readers of all ages, naturalist and National Book Award [Finalist] Montgomery traces her life through the animals that have shared and enhanced it. From the briefest of encounters (a glimpse of a white-furred ermine) to the heartiest of friendships (a 750-pound pig called Christopher Hogwood), Montgomery offers a look at the insights about humanity animals have given her. Some, like Octavia the octopus, are creatures she has studied; others, like a series of border collies, have been dear companions. Montgomery is equally as tender and observant in her recollections of a pinktoe tarantula as she is of her childhood Scottish terrier. …This is an endeavor that is filled with heart and should be widely shared. Plenty of memoirs center on animals, but few offer such variety, passion, and care.
—Booklist

When asked by a journalist what life lessons animals have taught her, acclaimed writer and naturalist Montgomery hardly skipped a beat in responding, “how to be a good creature.” Here the award-winning author elaborates on what she has learned from the animals she has loved and studied. Unable to conform to her parent’s idea of how a young daughter should behave, this only child in a military family found her closest ally and a beloved friend in her first dog, a rambunctious Scottish terrier named Molly, and it appears from there on in her destiny was sealed. The author has traveled the world and worked with animals in the remote locations under less-than-ideal, often physically challenging, situations. However, it was the death of two of her beloved pets and a profound depression, accompanied by suicidal thoughts, that nearly brought an end to Montgomery’s career. What ultimately saved the writer was a return to work and the “wildness” of nature that she believes keeps us “sane and whole.” As Montgomery demonstrates again and again, it’s not only the “tools of inquiry and intellect” it’s also “heart” that allows us to glimpse into a world that “is aflame with shades of brilliance we cannot fathom.” Verdict: Filled with fascinating stories of encounters and relationships with animals in various locations, this moving memoir will leave readers thinking about life on Earth, the creatures we share the planet with, and that “brilliance” we have yet to fully understand.
—School Library Journal

Sy Montgomery’s latest book is all about the pleasure that comes from a life rich with many creatures. How to Be a Good Creature, though, is about more than appreciating animals: It is about learning from them…. Animals are observant. Animals are loyal. Animals only attack when threatened. Animals respect the world they live in…. Animals love homeless people and members of the one percent equally. Animals don’t care about your job or your power or your fame or your status. Animals value you for the content of your character. This is why we should follow Montgomery’s advice and be more like animals ourselves.
—E. B. Bartels, The Millions

Montgomery writes books for adults and youth. This book has appeal for people of all ages. The language, beautiful and poetic at times, is filled with feeling and propelled by a quest for more – more knowledge, more adventure, more connection. It is, as promised, the story of a life lived in close proximity to animals. While that life is a privilege, it demands much of those who open themselves to animals and the environmental catastrophe that now imperils the wild world.
—Rae Padilla Francoeur, Foster’s Daily Democrat

This lovely, wise book is illustrated with black and white paintings that are childlike in their simplicity — the big eyes of the border collie, the smile of the pig — making this appear to be a book for children. It could be. But it could also be a book for anyone who has ever been entranced by another living creature. (Border collie lovers, beware: You will need Kleenex. Everyone else should be OK.)
—Laurie Hertzel, Minneapolis Star Tribune

Most readers will know Sy Montgomery as the author of titles about animals across the globe that she happily joins scientists in tracking, such as Kakapo Rescue: Saving the World’s Strangest Parrot and The Great White Shark Scientist. Here she turns to memoir to explain her relationship with animals, starting with her childhood reliance on Scottish terrier Molly and her finding her calling when she got involved with emu research in Australia. Though she traveled the world to document various animals, it was her beloved border collie, Tess, and Tess’ successor border collies, plus friendly pig Christopher Hogwood, that have brought the most meaning to her life and filled it with joy. She portrays animals at home and far away with keen and loving eagerness, and the account of animal- rich life on her farm with her husband has an idyllic tone that recalls mid-century animal-loving writers ranging from E. B. White to Sterling North. She also writes, however, with honesty about her difficult mother and bouts of depression, and the role of animals in her negotiation of both; her daunting struggles with loss, an inevitability when dealing with comparatively shorter-lived animals, are poignantly described. Readers will be drawn to the animal tales and the pastoral dream life, but they’ll also appreciate the acknowledgment of life’s darker aspects and the way connections with animals can bring important meaning to human lives. End matter includes a section of candid black and white photographs of the author and animals she’s known over the years, a personably annotated list of books that influenced Montgomery, and a list of her own books.
—The Bulletin of the Center for Children’s Books