Saving the Ghost of the Mountain: An Expedition Among Snow Leopards in Mongolia
Houghton Mifflin Harcourt (HMH), September 2009

Chapter 1: The Ghost of the Mountain

The two scientists sat on a ridge, binoculars and spotting scope in hand. Their receiver antenna had picked up a signal from across the narrow valley: Ping. Ping. Ping. The sound was coming from a radio transmitter. Tom McCarthy, the blue-eyed, bearded Conservation Director of the Seattle-based Snow Leopard Trust, had attached the transmitter to a collar around the neck of a big male snow leopard whom he’d captured and released a year earlier.

Tom called the leopard Blue. Along with the collar, Tom had also given the cat blue tags in both ears so that Tom could recognize him. If, that is, he ever saw Blue again.

It looked like he might—soon. The scientist’s heart pounded with excitement. “We knew exactly where he was from the signal,” Tom said, “and it was a completely barren hillside.” There was nothing to block the view. What luck! Now was their chance to spot the animal to which Tom had dedicated his career—the most elusive cat on the planet.

People call it “The Ghost of the Mountain.” A pale, spotted, almost cloud-like coat makes the snow leopard uncannily invisible. People live their whole lives in snow leopard country and never see one. 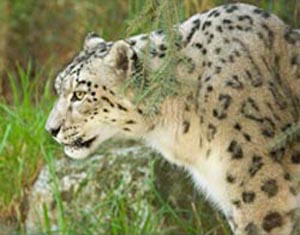 Snow leopards are as tough as they are beautiful. Like ghosts, they seem to have almost supernatural powers. They survive in some of the harshest, most remote, most extreme habitats in the world. Snow leopards can live at altitudes too high for trees—sometimes in places with only half the oxygen people need to breathe easily. They thrive in temperatures cold enough to freeze human tears.

With a long, thick tail for balance, a snow leopard can spring at its prey from 30 feet. It can bring down an animal three times its size. Prowling along ridges, slinking below skyline, it’s as invisible, yet as powerful, as the wind.

On that day on the ridge, the scientists knew Blue was right in front of them. They scanned with their scopes. They blinked. They scanned again. But they simply couldn’t see him. Standing still, his spotted coat blending into the stony background, the snow leopard was as invisible as a spirit.

Then the “ping”ing got faster. Blue was moving. “Oh, we’re going to see him now!” Tom thought. Again, the men scanned with their scopes. They still couldn’t see him. 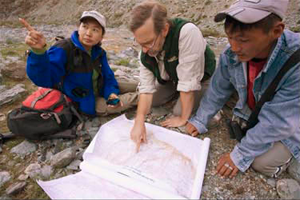 Snow leopards are so hard to see, so difficult to find, that they were once believed to be part flesh, part phantom. Even today, almost nothing is known about them. They are nearly impossible to study.

For many minutes, the men watched, seeing nothing. The changing pitch and volume of the radio telemetry told them what the cat was doing: He walked across the barren hillside. He descended to the valley floor. He crossed the little valley and turned a corner. Then the signal stopped. Blue was gone. “The whole time,” said Tom, “both of us were watching through binoculars and spotting scope. We never saw him.”

“How could we not see that cat?” Tom asked his partner. “Maybe we made a mistake.” Maybe Blue wasn’t really on the opposite hillside. Maybe he was on the same side as the scientists, and the radio signal was bouncing off the mountain opposite them—like an echo. This sometimes happens with radio telemetry. So the men decided to descend the ridge, cross the valley, and look for tracks.

“Sure enough,” said Tom, “there were his tracks. And there was a great big poop in the middle of the trail! We’d been looking right at him. That tells you why you don’t see a snow leopard very often.” And why they call it the ghost of the mountain. 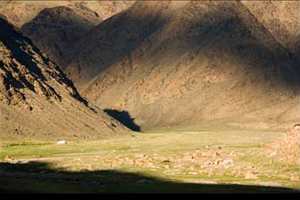 No wonder nobody even knows how many snow leopards there are. Scientists think there might be only 7,000 left in the world… or only half that many. Snow leopards live scattered over a vast range in Central Asia: from the stony highlands of Russia and Mongolia, through the misty mountains of China and Tibet, to the remote Himalayas of India, Pakistan and Afghanistan. Because they live in such extreme environments, snow leopards may never have been common. But today they are so rare they are in danger of disappearing for real. They’re hunted for their beautiful fur. They’re killed for their bones. (Like tiger bones, they’re used in Oriental medicines—which don’t work.) But the worst threat to this powerful cat is actually from sheep. Sheep? That’s right. Because they eat all the grass, domestic sheep and goats raised for milk, meat and wool drive away wild sheep and goats, snow leopards’ natural prey. The hungry cats have no choice: they are forced to eat livestock. Herders then try to hunt and poison the snow leopards to prevent more losses. That’s the crisis that brought Tom to study snow leopards more than 15 years ago. He began his research in a country that many Americans can’t find on a map.

Mongolia, a country the size of Alaska, sits in the middle of Asia. Mongolia was the home of the great conqueror, Genghis Khan, who founded the largest land empire in the world. Mongolia is the land of the Great Gobi, the world’s second-largest desert (only the Sahara is bigger) which yielded the world’s first discoveries of dinosaur eggs. 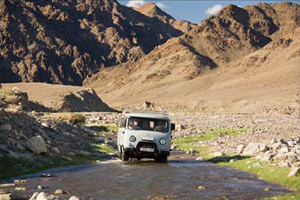 It’s a land where the people live in round, felt-covered tents and tend their roving herds of sheep, goats, camels and yaks. It’s a land of stark landscapes and rich wildlife: The ibex, a wild sheep crowned with huge curving horns. The world’s last wild Bactrian (two-humped) camels. The ancestor of the modern horse, the takhi. The rare and endangered Gobi bear.

Few people know another fact about Mongolia: It’s where as many as one-third of the world’s wild snow leopards may live. And that’s why Tom came here, to try to study an animal he knew he would hardly ever see. He came to try to save a ghost from extinction.

A nearly impossible mission drew Tom up that ridge that day, searching for Blue. And that same, ongoing mission now brings him back to Mongolia again. He’s headed for the Altai Mountains, at the edge of the Great Gobi, on a new expedition that begins today.

After he last left Mongolia, nine years passed before he saw a snow leopard again. And on this trip, Tom doesn’t expect to see a snow leopard, either. What he hopes for is even more important. With a small team to help him, he’s hoping to count snow leopards—without seeing them. He’s hoping to find a way to better estimate how many snow leopards really live in this high, stony desert—and see if those numbers are changing. It’s the only way he can find out if the Snow Leopard Trust’s efforts to protect them are working—before the snow leopard really becomes nothing but a ghost.