A human would mistake the sound for a ringing phone. But I know better.

That’s no telephone. It’s Mitzi, the African grey parrot who lives in the cage next to mine. And I know what she’ll do next, too. She’ll answer it.

“Hello!” she says in a voice like a cheery old lady. “Ohhhh! Is that so?” Mitzi pauses as if she’s listening to a caller. “Tell me more!” She laughs. “Really? Oh yes, I agree, yes.” And so the conversation goes—on her imaginary phone with her imaginary caller.

Finally, Mitzi has talked long enough. “Okay! See you Friday!” And then she makes the click of a phone hanging up. Mitzi parrots it all perfectly. No wonder: she’s a parrot.

Many of us here at Bird Lovers Only parrot rescue share Mitzi’s talent. Take the African grays, Ben and Bandit, whose cages are next door to one another on the other side of mine. They used to live with an older couple. Bandit speaks in the voice of the wife:

Ben plays the husband, Larry. “What?” he asks wearily. But it’s not always Larry’s voice Ben imitates. Ben usually waits till the room is silent. Then he lets loose with his masterpiece: another sound also seems to have graced the couple’s home often enough for Ben to have perfected its every note:

Bandit offer his review in the voice of the wife: “Oh, my WORD!”

Then Ralph, the blue and gold macaw, starts up. He opens his wings and calls out, “C’mon in!” Mookie, a large white Moluccan cockatoo, starts in. “BAAAA!” Sheep used to live in her yard. Next, June, another macaw, screams “Cut it out! Cut it out!” 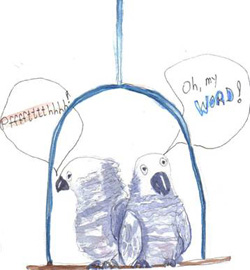 Few parrots can resist adding to the symphony. Some of us can mimic car alarms, police sirens, dripping faucets and barking dogs. You should hear us. We beat any composition of Mozart’s, if you ask me. He wrote fine music, I’ll grant you—just a bit limited. But parrots could have improved his work. To the notes he penned, we might have added, for instance, the sounds of squeaking hinges, the calls of barnyard animals–and maybe even Larry’s troubled tummy.

Yes, we parrots are great composers, and great performers, too. You’d think more of us would go into show business, like I did. But I’m the first to admit that while parrots are surely the most splendid and brilliant of creatures, not every parrot is as talented as I am.

I’m a sulfur crested cockatoo—a medium-sized white parrot with a tall yellow crest. But folks around here call me a “Rockatoo”. That’s because when I dance, I really rock out! Surely you’ve seen my video on You Tube: Time magazine named it one of the top 10 videos of the year. [You can see it here »]

Since my You Tube debut, I’ve danced on The Tonight Show and on Good Morning America. I pooped on the back of a chair on The Late Show. My fame has spread far beyond my cage, way beyond the neighborhood here in Schererville, Indiana—even beyond the continent of North America. Recently I starred on a quiz show in Japan. It was called “Believe or Not.” Two of the five human panelists on the program couldn’t believe a bird could dance like I do. 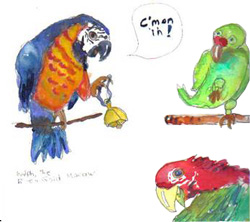 Few parrots can resist adding to the Why would anyone give up the chance to live with someone so beautiful, so gifted? Someone who can both fly and talk, someone devoted enough to stick with a mate for life—a life that can last for 70 years or more? Go figure. We parrots suppose it must have something to do with humans’ many limitations. (They’re not that bright—the poor, featherless things.)

For instance, most humans don’t understand parrot humor. One of my friends, an all-white Moluccan cockatoo named Angel, has a genius for solving puzzles–and the most intriguing puzzle of all is how to get out of our cages when people aren’t looking. So Angel does this for us. No matter how many different kinds of clips or locks close our cage doors, Angel opens them with her strong beak and deft tongue. She loves to dump all the food in all the cages on the ground. It’s fun hearing the dishes crash on hit the floor—plonk!—and watching the all the pellets, fruit and nuts scatter everywhere. Whee! Then we all come out of our cages, shrieking at the top of our lungs with pleasure, and toss our toys around and chew the furniture. Can you imagine anything more hilarious? Yet when the people finally discover Angel’s merry prank, they never laugh. They just don’t get it.

Chewing is another thing people don’t appreciate—even when we’re doing it for them! One parrot I know created a lovely nest for him and his person. (We parrots normally choose fellow parrots as mates, and we usually nest in hollow trees. But in captivity, we can make do.) One day while the person was out, the parrot enlarged the opening beneath an antique chest of drawers. Shredding the wood with his chisel-like beak, he created a cozy cave within the chest. He even lined the cavity with soft, chewed bedroom curtains.

It was a great nest site, believe me. You’d think the person would have been impressed. But no. The person wouldn’t even go inside to inspect it, much less lay an egg there.

Alas, it was a doomed romance. His human mate couldn’t measure up to parrot standards. The way I see it, parrots are superior to people in every way. But strangely, most people are so confused, they actually think it’s the other way around! No wonder humans have trouble meeting the demands of such creative minds—not to mention such busy beaks. Too many captive parrots never find the homes they deserve.

Luckily for my many fans, I did. So I’d like to thank all the little people. Every great performer deserves a lucky break–and though I didn’t know it at the time, the day my people brought me to Bird Lovers Only parrot rescue, I got mine. This is my story.