The Wild Out Your Window: Exploring Nature Near at Hand
Down East Books, 2002 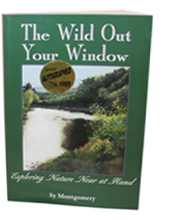 “The Mole: The Little Gentleman in Black Velvet”

This spring, you’re sure to spot a literary celebrity in our midst.

With a velvety coat, whiskered snout and big, cartoon-like hands, the mole, scurrying across the road, racing through the grass, or making shallow tunnels in newly-dug gardens, looks just like its famous namesake from The wind in the Willows.

Gardeners and greens-keepers detest the molehills and tunnels, but the mole itself—soft, small, seeming to squint Mt. Magoo-like the in the sun—is almost irresistibly charming.

“If you ever even saw a picture of a mole, or held one in your hand, any bad thoughts you might have had about moles will disappear,” promises Patricia Guptill, who studied moles as a graduate student at Indiana State University.

Most of us are blessed with at least three species of mole in our area, depending on where you live. The Eastern mole, found in southern Ontario and from southeastern Wyoming and Texas to Massachusetts to Florida, looks pretty much like the standard, stout, cylindrical, four-inch model with a short, naked tail. The hairy-tailed mole is found throughout much of the same region, and is distinguished from the eastern mole by (you guessed it) its hairy tail. And the star-nosed mole, also an easterner is unmistakable: the tip of its muzzle is ringed with 22 pink fleshy appendages known as tentacles, which this water-loving creature uses to locate prey underground and under water. There are also three species of Western American moles.

You’re almost certain to see some of these of these fellows soon. Mole populations can triple between May and June, when there may be as many as 11 per acre. At the tender age of 10 weeks, males quest after their own territories, often traveling above ground—giving you an extra opportunity to encounter what one book editor has suggested is “perhaps the most engaging of all wild animals.” (Bear in mind that this was the editor who wrote the jacket copy for a book on moles, The Mole by Kenneth Mellanby.)

But he has a point. Moles are widely admired. For years, the brave English rebels, the Jacobites, commenced their feasts with a toast to a mole, raising their glasses “to the little gentleman in black velvet”—the particular mole who, digging near Hampton Court in 1702, constructed the molehill over which the horse of the despised King William the Third stumbled. The horse threw the kind and he died days later.

From detailed probes of moles’ underground lives, researchers can now confirm what the Jacobite story suggests: a mole is a force to be reckoned with,

True, moles have no external ears and their eyes are so tiny you can hardly see them at all. (You can make out the star-nosed eyes if its face is wet from a recent swim, or the hairy-tailed’s by gently blowing the fur back from the face. But the eastern mole’s eyelids are actually permanently fused.)

But moles are not dim and helpless, as they’re often perceived to be. This modest hero of children’s stories is a creature of surprising strength, exquisite sense—and if the situation demands, startling savagery.

“So much is written about the aggressive nature of moles that one might be forgiven for thinking of them as the raging psychopaths of the countryside,” assert Scottish mammalogists Martin Gorman and R. David Stone of the University of Aberdeen. Their review of mole literature unearthed many accounts of mole gladiators. One experimenter put a mongoose and a viper together with a mole, and the mole dispatched them both. Moles will kill and eat other moles housed with them in captivity, and will occasionally bite people who pick them up. (To avoid this, pick up the mole by its tail, or hold its head still behind the jaws. Even if it does bite, you won’t get rabies; there’s no record of a mole’s transmitting this disease.)

Fortunately, the average mole faces few such annoying encounters. Under normal circumstances, it behaves like a gentleman, disturbing no one, except for the tons of invertebrates it consumes over a lifetime. While moles are best known for eating earthworms, in some areas they eat almost exclusively lawn grubs, snails, beetles and millipedes.

Each mole’s burrow system consists of several nests and two types of tunnels. With big, powerful shoulders and shoveling hands, moles almost swim through the soft shallow soil to create their superficial tunnels—the ridged eruptions that wend through gardens and lawns. Breast-stroking, they push the loose dirt up and aside.

They create molehills as they dig deeper tunnels. At depths of 10 to 20 inches, they shear away heavy soil with alternating strokes of their hands, pushing it to a side tunnel that leads to the surface.

As the spoilheap is brought to the surface, the new soil erupts over the molehill “like a small volcano in action,” in the words of one observer.

How do we know about the underground lives of moles? In large part because researchers have succeeded in gluing radiotransmitters onto their tails. Gorman and Stone’s book, A Natural History of Moles, records a Dutch mole digging a record 66 feet in one day (a veritable Holland tunnel) and a workaholic Scottish mole who dug nonstop for 4.5 hours. (This was an unusual burst of activity, probably a youngster establishing a territory.)

The deep tunnels are used for years, allowing the architect to live a leisurely life once his network is established. Moles don’t dig new tunnels each time they forage, and in fact, a very active mole territory may have few molehills. They appear only when a new tunnel system is constructed, or when an existing one is repaired or extended.

Moles are amazingly strong. The eastern mole can move 32 times its own body weight, which ranges from 2.3 to 4.0 ounces. But that everyday feat was far surpassed in 1957 by a golden mole—a native of Africa—in captivity. The two-ounce creature was recorded moving an iron cover in its enclosure; the cover weighed 21 pounds. That’s about like a 150-pound man pushing around a black rhinoceros.

And moles move fast. That’s partially a consequence of their velvety fur; it offers no friction whichever way it’s rubbed, so a mole can sail through its polished tunnel.

(The unique softness of mole fur has fueled several fashion crazes for moleskin coats, but each of these fads faded away—perhaps because the coats develop pressure marks that display all too clearly the anatomical details of the wearer’s derriere when they’re sat on for long periods.)

You might think that dim-sighted moles, propelling themselves through their tunnels at up to 2.5 miles per hour, would regularly blunder into walls. That this doesn’t happen is due to the creature’s exquisitely sensitive snout, which is covered with thousands of Eimer’s organs—named after their discoverer. The star-nosed mole’s tentacles provide the most striking illustration.

Under a microscope, each of the Eimer’s organs looks rather like a molehill, and beneath each sits a blood-filled bundle of sensory nerves. This provides extremely subtle tactile information.

How subtle? One researcher taught a tame mole to distinguish a jar of food from an empty jar by sensing textures engraved on the lid by 2 one-thousandths of an inch in width and depth.

The mole’s face, tail and the back of its hands are also endowed with special sensory organs. These hairlike structures, called vibrissae, function like the whiskers of a cat. Each sits upright in a fluid-filled sac, like a straw in a bottle. These hairs can move separately and tell the mole’s brain not only whenever he touches something, but also the duration, speed, amplitude and direction of the hair’s resulting movement.

“The mole has a more sensitive sense of touch than any other animal alive,” says small-mammal researcher Joseph Merritt, director of the Powdermill Biological station in Rector, Pa.

A mole’s world is a dark and tactile one as rich and wondrous as a dog’s world of scent. And to us, as incomprehensible.”