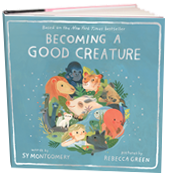 Green’s illustrations depict warmth and tenderness in every line and stroke of gouache. A thoughtful, gentle work that highlights the connection between animals and humans. This tender picture book will inspire reflection.
—School Library Journal, STARRED REVIEW

K-Gr 4–The collaborators behind Montgomery’s 2018 memoir, How To Be a Good Creature, return for a picture book version. Vivid language and emotive illustrations effectively depict Montgomery’s connection to animals. Montgomery observed the actions and behaviors of her first pet, a dog, which inspired her to learn more about animals. Her love of observation and research expanded to many more creatures, and her travels took her around the world. She lived in tents, hiked in jungles and deserts, and went wherever her work required her to go. The lessons she shared in her adult memoir have been reshaped for young readers. Green’s illustrations depict warmth and tenderness in every line and stroke of gouache. VERDICT A thoughtful, gentle work that highlights the connection between animals and humans. This tender picture book will inspire reflection.
—School Library Journal, STARRED REVIEW

Life lessons for young humans gleaned from a lifetime living with other creatures.

Reprised for young readers from Montgomery’s memoir (for adults) How To Be a Good Creature, this picture book’s message is concise and clear: Humans are only one of many creatures to inhabit the Earth, and knowing, respecting, and learning from other creatures will help humans become better creatures themselves. The organization of the story is also clear and concise: A short piece of advice is augmented by a brief story relayed in accessible, direct language from the author’s personal experiences in a lifetime of observing and being around other creatures. “Make Your Own Family” describes the author’s family of hens, a dog, a pig, a husband, and neighbors; the poignant “Trust Tomorrow” relates a dark period that lightened with the unexpected arrival of a dog; and “See For Yourself” relays the author’s observations of the gentleness of the oft-reviled hyena. Other topics include seeking similarity, forgiveness, and the importance of small creatures. Avoiding triteness, the narrative establishes a connection between humans and other creatures as it teaches that respect for the animal world is a good way to become a good human, too. Green’s visually pleasing illustrations are rendered in a warm, earth-hued palette, and they have an uncomplicated design that effectively complements the story’s wise, authentic narrative. Montgomery presents White.