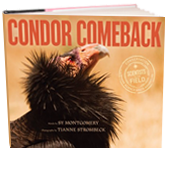 Montgomery, no stranger to science in the field, opens her introduction to this ongoing captive breeding program with a visit to the Santa Barbara Zoo. The zoo’s director of conservation, Estelle Sandhaus, introduces the writer and her readers to the species and the restoration process. They join ongoing California fieldwork in the form of condor checkups. These birds are still so endangered that wildlife specialists attempt to recapture each condor living in the wild every year, to check on its health and tracking devices. In an immediate, present-tense narrative, the writer describes the details of these checkups and some of the hazards: While holding birds, she was pooped on and bitten. They visit a biologist watching a nest site and see a new fledgling. After readers are thoroughly engaged with the birds, the writer steps back to describe continuing dangers—lead poisoning and microtrash—and the lab work that identifies the problems. She touches on the effects of wildfires in the birds’ neighborhoods; visits another nest watch; and talks with a tribal educator with the Santa Ynez Band of Chumash Indians, who revere the condors and are especially interested in their return. She and Dr. Sandhaus watch a chick webcam and meet third graders who’ve been studying condors. Close-up and long-range photos enliven every page. Most but not all of the researchers are white; the students are mostly Latinx, and one uses a wheelchair.
—STARRED REVIEW,< Kirkus

The California Condor’s stunning and fragile existence swoops into focus in the latest Scientists in the Field title. In 1982, fewer than two dozen California Condors were left in the wild, their numbers decimated by hunting, habitat loss, and poisoning from lead shot in the animal carcasses they eat. A collective effort led by conservationists and zoos is slowly rebuilding the population, but they remain critically endangered. As Montgomery relates this history, she introduces readers to scientists and volunteers, mostly women, working to protect the condor today, including experts at the Los Angeles Zoo, field ornithologists checking each wild bird, toxicologists testing for lead, and a Chumash tribal educator who discusses how “the condor is a spirit helper for the Chumash.” Alongside Strombeck’s crisp photographs, Montgomery details the realities of their work—from thrilling moments such as spotting a baby chick to long observation sessions where not much happens—and has a knack for evocative descriptions (a “bird half the size of a small sofa,” “rustling feathers—like dozens of debutantes in taffeta ballgowns”). Though the condor’s future remains tenuous, Montgomery’s compelling page-turner inspires optimism. Ages 10–12. (July)
—STARRED REVIEW, Publishers Weekly

Condors, the largest birds in North America, are in danger. Zoos and condor conservationists are fighting to stop their population numbers in the wild from dwindling and to keep their natural habitats from shrinking. While scavengers might get a bad rap, this book explains the need for condors in the ecosystem, as well as the efforts to save them. Like many of Montgomery’s nonfiction titles in the series, this recent entry does an excellent job of incorporating facts and narrative information about an animal not typically covered in stand-alone titles. The engaging call-to-action message is paired with gorgeous photographs that immerse readers in the condors’ world. Each chapter describes a different aspect of condor conservation, including the care and upkeep of baby condor chicks and how to train children to be the next generation of conservationists; also found here are many harrowing stories of how scientists have protected these majestic birds. A historic time line of condors, an epilogue about some of the condors featured, a list of what readers can do to save these birds, a bibliography, further reading, and an index are included. Verdict: This worthy addition to elementary and middle school nonfiction collections spotlights the plight of a misunderstood bird.
—School Library Journal.

The Scientists in the Field series’ marquee author Sy Montgomery returns to take on, for her, an unusually domestic topic: the California condor. This massive bird, a member of the vulture family, was technically extinct in the wild in 1987, but eventually captive breeding programs allowed for releases, and now there are over 500 of the birds. That’s still a small and precious population, and Montgomery shadows Dr. Estelle Sandhaus of the Santa Barbara Zoo as she and her team clamber up into the California mountains to track and give exams to the huge yet fragile birds. She also confers with Myra Finkelstein, an environmental toxicologist whose work confirmed that condors feed on animals killed by hunters and then suffer lethal lead poisoning, and Jacy Romero, a tribal educator with the Chumash Indians, a people with a long relationship with the condors. It’s a wide-focus take on an environmental success, tempered with patience, the odd condor bite (Montgomery gets nipped helping out with the exams), and setbacks (the first young condors released into the wild were basically adolescent vandals), but ultimately it’s a story of unusual triumph for a species so close to extinction. The book leans into the condor’s not typically cute appearance, with vivid images that range from the comic to the majestic, and it’s candid in text and pictures about the realities of scavenging and the fate of many birds. The book does a shoutout to vultures of all kinds, adding to this book’s relevance even in areas far from California, and youngsters will be galvanized by the possibilities of this kind of scientific work and keen to find ways to join in. End matter includes tips of what readers can do, an excellent short bibliography, a list of online resources (including various condor cams), and an index.
—STARRED REVIEW, The Bulletin of the Center for Children’s Books

Sibert Medalist, National Book Award Honoree, and New York Times best-selling author Sy Montgomery turns her formidable talents to the story of California condors and the scientists who have fought against their extinction in this installment in the award-winning Scientists in the Field series.

In April of 1987 the last wild California condor was captured and taken to live in captivity like the other twenty-six remaining birds of its kind. Many thought that the days were over of of this remarkable, distinguished bird that had roamed the skies of North and Central American for thousands of years.

Sy Montgomery employs her skill for on-the-ground reporting, shrewd observation, and stunning narrative prose to detail the efforts of scientists, volunteers, and everyday citizens to get California condors back in the wild. In particular, Montgomery profiles employees at the Santa Barbara Zoo who have worked tirelessly to raise abandoned chicks, nurse sick birds back to health, and conduct research that can support legislation to ban what is probably the largest threat to the existence of the wild condor: lead bullets. In turns affectionate and frustrated, hopeful and heartbreaking, Montgomery’s powerful prose does justice to these ancient, sociable, and elegant creatures.

Complete with world-class, full-color photography and helpful sidebars that provide details such as the history of the bird’s fight back from extinction, the dangers of lead poisoning, and the relationship of condors to the Chumash nation, Condor Comeback is an inspiring story of groundbreaking science, perseverance, and cooperation.
—ibookdaily.com