On remote Codfish Island off the southern coast of New Zealand live the last ninety-one kakapo parrots on earth. These trusting, flightless, and beautiful birds—the largest and most unusual parrots on earth—have suffered devastating population loss. As their habitat became invaded by predators introduced by humans, the kakapo population on mainland New Zealand decreased from uncounted millions in the mid-nineteenth century to near extinction by 1950.

Now, isolated on an island refuge with the last of the species, New Zealand’s National Kakapo Recovery Team is working to restore the kakapo population and protect it from exposure to anything that might threaten its fragile balance. No human can visit the habitat on Codfish without first disinfecting all of their belongings, and flying across stormy seas to land on a tiny beach. Once on the island, there is plenty of hard work for everyone and every bird: special food to prepare and deliver, radio-wave tracking devices to install, live video to monitor, and, of course, precious baby kakapo to hatch and feed. With the help of fourteen humans who share a single hut and a passion for saving these odd, ground-dwelling birds, the kakapo are making a comeback in New Zealand. 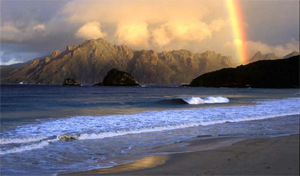 Follow intrepid animal lovers Sy Montgomery and Nic Bishop on a ten-day excursion to witness the exciting events in the life of the kakapo. By turns emotional, fascinating, dangerous, and hilarious, Montgomery’s and Bishop’s sensitive and scientific chronicle explores all there is to know about these “winged weirdos.” 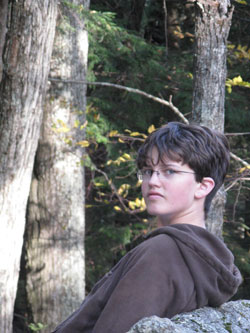 Aaron Friedman of Wilton, Connecticut is so enchanted by the endangered kakapo that he’s made the species and its plight the theme of his Bar Mitzvah. This important Jewish coming-of-age ceremony celebrates a boy’s transformation to manhood. What better way to celebrate than to share with others the joy and power of helping to save a species? Aaron created a beautiful flier on the kakapo which he has included in every invitation to the ceremony. At the celebration following, each table will be adorned with the photo and name of one of the individual kakapo who remain. In lieu of gifts, Aaron is asking friends and relatives to donate to the Kakapo Recovery Programme. This bright young man—already a talented writer and artist—is raising both awareness and money for this beautiful and unusual endangered parrot. Here’s hoping his example will inspire other young people to do the same!