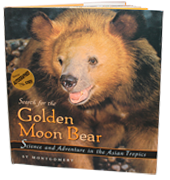 From the leafy shadows of the little outdoor cage, a pale face stared out at us-the face of a shy, young female bear.

The sight of her took our breath away. She was as unusual as she was beautiful. Framed by the unusual cream-colored fur of her face, her brown eyes were ringed in black, almost like a panda’s. But she was no panda. Her ears were tall and round, and stood up like those on Mickey Mouse. She had a furry mane, like an adult male lion’s. On her chest was a white V, like on a college sweater. But what was most exciting was her amazing color. The fur of her back, sides, and belly—most of the bear in fact—was different shades of gold. She was like no other bear we’d seen before, not even in a photo or on television.

What kind of bear was she? We had come a long way to meet her—all the way to Cambodia in Southeast Asia. But with good reason. As we sweated in the jungle heat, we realized with awe that we were looking at a bear that was unknown to science.

But wait—haven’t all the animals in the world been discovered already?

Scientists are discovering new creatures all the time. From the tall canopies of rain forest trees, from the depths of oceans, new insects and unknown fish are uncovered every year. Occasionally someone finds a new species of frog or rat.

But this was a new bear—a big mammal! How could it be that no scientist had seen it before? Could we find others like her? Did they all live in one area, or were they all over Southeast Asia? And what, exactly, was this bear? Was this an entirely new species? Was it a new color of a species already known? Or was it just a light coat the young bear would outgrow?

That’s what we came to find out.

This is the story of our scientific search. It’s a story full of surprises. Our discovery didn’t happen the way you might expect. What we actually found out was very different from what we’d originally imagined—and important for different reasons than we had thought. In fact, just about everything about our search for the golden moon bear was surprising, right from the beginning.

Or maybe I should say “beginnings”—because this story has not just one beginning, but three: One in the tropical province of Yunnan, China. One in the Peruvian Amazon. And one in my small hometown in southern New Hampshire. For one of our surprises was that sometimes, discovery is waiting for you just around the corner. And sometimes it takes you around the world. 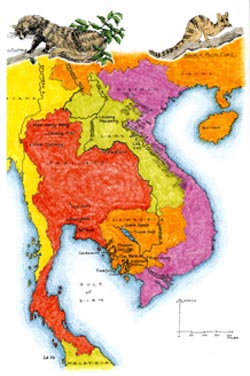 We were in this little town in Yunnan called Simao,” the scientist told me as we canoed down the dark waters of a tributary of the Amazon one night in June. Dr. Gary Galbreath, an evolutionary biologist and professor at Northwestern University, was always telling me cool stories. He told me about the armadillos he had studied in Florida as a graduate student (a pair of them used to sleep with him in his bed). He told me about giant sabre-toothed cats, American zebras and giant ground sloths—creatures whose fossils he had sorted at Chicago’s famous Field Museum. He told me about the giant, carnivorous terror birds—wingless, six-foot-tall birds who seized their prey in two-fingered hands—who used to haunt the Amazon during the Age of Mammals. I was writing a book on the Amazon, so I always listened to him carefully.

But on this particular night, Gary was telling me about his first trip to a very different land—China. He had traveled there in 1988 with a group of other biologists. While visiting a little town in Yunnan, China’s most tropical province, he saw something that he would never forget.

“My friend, Penny, called me over,” he told me. “She said there was something I should see. And there, in this little cage—it was sort of like a town mascot, and taking peanuts, very gently, from people’s hands—was this young male bear, with tall round ears and a white V on the chest. But what was remarkable was, its coat was golden. I had never seen anything like it.”

Neither had any other scientist, Gary soon discovered. He visited China’s great natural history museum, at Kunming, and looked through its collection of bear skins. Not one looked anything like the bear he’d seen! When he got back to the United States, he searched though scientific papers about bears. He even translated papers written in other languages. No scientist had ever described a bear like this!

“I always wanted to go back there and find out more,” the biologist told me. But China is a long way to go. Would the bear still be there? Even if it was, this was just one specimen. That’s not enough to prove you’ve discovered a new species or even a new color. What if the gold bear were just a mutant—a single wierdo, like a five-legged cow?

Still, Gary never forgot that bear. Here we were, nearly ten years later, and he was still wondering about it. “But it was just one, weird bear,” Gary told me that night in the Amazon. “Surely if it were something new, it would have already been discovered….”

Or so we thought—until a year later, when I met Sun Hean.

This time I was back home in New Hampshire. I was going to a friend’s birthday party, about three miles from my house. There I met a young man who was visiting one of the guests at the party. Sun Hean was one of the youngest people at the party—he wasn’t even 30 years old yet. He knew no one else there. He was shy. But I was eager to talk with him. You would be, too! Sun Hean was from Cambodia—a tropical land in Southeast Asia—and I wanted to hear all about its jungle animals.

I knew there lived wild Asian elephants, and Indochinese tigers, and two kinds of bears, sun bears and moon bears, both of them jet black. I remembered Gary’s golden bear. “In your country,” I asked Sun Hean, “Have you ever heard of a bear that wasn’t black?”

The young man’s brown eyes grew wide with astonishment. Why, yes—in fact, he had just received photographs from one of his co-workers in Cambodia of a very interesting bear, a very strange and beautiful bear, he told me. She had been caught wild and was now living in a cage on a palm plantation in southwestern Cambodia.

Sun Hean replied, “It is the color of gold…”

I arranged for Sun Hean and Gary to meet. The two men compared photographs of the two golden bears, taken 1,000 kilometers and 11 years apart. They were nearly identical. Now it wasn’t just one weird bear. We knew there were more out there. But what were they?

We began to plan our expedition.