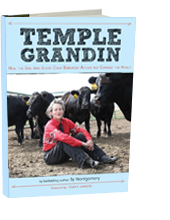 Chapter One: Senses on Fire

Every day at school, she dreaded the sound: the loud, deep ring of the old-fashioned school bell. The janitor rang it at the end of each class: CLANG! CLANG! CLANG! Most kids were happy to hear it—but for Temple Grandin, the ring of the bell hurt like a dentist’s drill hitting a nerve. She covered her ears, but she could still hear it. There was no escape.

For Temple, ordinary sensations could be torture. The grip of a stretchy wool hat pulled over her ears felt like her head was caught in a vise. New socks and underwear scratched like sandpaper. Wearing a stiff petticoat beneath her church dress on Sunday felt like needles stabbing her skin. Sometimes it felt as if her senses were on fire.

At times, a teacher’s perfume could smell so strongly that Temple couldn’t even think. Its odor drowned out the meaning of the writing on the blackboard, overwhelmed the sound of the teacher’s voice. Human voices themselves made little sense when Temple was small: although some noises were painfully loud, words were terribly unclear. If somebody said, “Joe walked to school” she heard only, “oh ah ool.” The adults around her sounded as if they were speaking gibberish. Sometimes the only way she could communicate was to throw a temper tantrum. She would howl her frustration wordlessly, break things, flap her hands, and cry.

Temple’s mother knew her first child was different, almost from the start. Most babies love to be cuddled; but Temple would stiffen and pull away from her mother’s arms. Most children look with special interest into people’s faces, particularly the eyes. Temple didn’t meet other people’s gaze. And while most toddlers begin to talk around age two, Temple didn’t speak at all.

Temple’s mother loved her. But Temple was a difficult child to love. She did so few of the things that typical children do to make people love them.

She didn’t laugh. She didn’t smile when tickled. She didn’t hug her mother or father, or hold out her arms to be picked up. At age two, and three, or even four, she never said, “I love you, Mommy.” 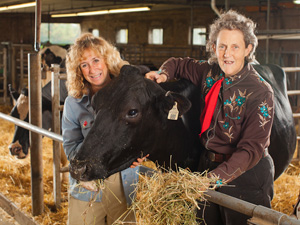 Rather than play, Temple drew on the walls with pencils and crayons. She peed on the floor. Instead of playing with cardboard puzzles, she chewed them up and spat them out. Temple didn’t speak until she was five–and even then, her words came out in spasms, not sentences. She might blurt out a word like “ice” or “mine” or “no,” but only when she was upset. Most of the time, nobody understood what Temple was saying. No one understood what she was feeling. And nobody could guess what—and some wondered even if–she was thinking. Her own father thought Temple was retarded. He wanted to send her away to live in a mental hospital.

Temple is now in her sixties, but she still remembers the frustration she felt as a child. She recalls one day in kindergarten: The teacher was showing the class how to sort words according to the first letter in each. In a workbook with pictures, the teacher asked the students to mark the pictures that showed objects whose names began with a B. The book showed a suitcase, a birdbath, a chair…Temple went right to work. By that time, she knew the alphabet. She recognized the pictures immediately and began to sort them out in her mind. The suitcase was the same thing her parents packed when they were traveling—a bag, or baggage—so Temple marked that picture with the Bs. The birdbath just one of many things pictured in a flowery garden, so that surely belonged with the Gs. Temple was pleased with her answers.

But the teacher marked almost all Temple’s answers wrong. Temple couldn’t explain what she’d been thinking. She knew she was right. The word “baggage” really started with the letter B and “garden” really did begin with the letter G! Temple had a good mind. In fact, she was quite brilliant—though no one knew that then. Her mind didn’t work the way other people’s did.

When she was three, Temple was diagnosed with autism (AW-tizm). It’s a disorder of the brain that is still poorly understood. Autism affects people in different ways. For some autistic people, words never make sense. Some never learn to speak, never make friends, never come to understand the world as anything but one painful, random event after another. For others, their autism can be mild. They’re nerdy, geeky kids who are often very bright, but with uneven skills. They can grow up to make computers in Silicon Valley.

Like most people with autism, Temple’s mind was assaulted by a sensory system that didn’t work properly. Her ears and eyes and nose worked fine, but the information they carried to her brain came through distorted. Sounds were too loud, scents too strong, words garbled. Sometimes a bright light or a whirring fan was physically painful. She loved flapping flags, but the sight of one was so engrossing, it made it difficult to concentrate on anything else.

To escape the painful noises, confusing words, and overwhelming sensations, Temple would twirl. Many kids like to twirl in circles, but Temple twirled for hours on end. She would also spin coins and jar lids and watch them for hours. Retreating into her own world, she could screen out the confusion around her.

At the sandbox or at the beach, Temple loved to dribble sand through her fingers. She would watch the way the sand dropped through her hands for hours, absorbed completely in the beauty of each unique grain. She noticed and remembered every detail—the size, the color, the shape, the way the light made some grains into beautiful, gleaming gems, and others into glinting shards of gold or silver.

In fact, Temple saw almost everything in exceptionally rich detail. She could recall every image almost as perfectly as if it were a photograph or a movie. When Temple thought, in her mind she would run a videotape of images. Each image was real—not some generic representation of a thing, not the idea of a thing, but the exact image of a thing or event that she had once really seen. When she thought, there were no words. Words were difficult and strange. Thinking was something Temple did entirely in pictures. She does so to this day.

Most of us think mainly in words or ideas. The pictures in our minds aren’t very clear. Quick: what color are your best friend’s eyes? How many windows are on the front of your school? Do you have freckles on your hands? Without looking, can you remember how many? Where are they?

When you hear the word “church steeple,” you probably see in your mind a sort of general, tall white pointy structure on a roof of a house of worship. But when Temple thinks “church steeple” she sees a series of very specific pictures: the steeple on St. Paul’s Episcopal Church in Dedham, Massachusetts where she grew up; the one with a giant cross in Ft. Collins, Colorado, the town where she now lives and teaches at the university; an odd, round steeple at another church in the same town; a square one made of cinderblocks painted white, with green trim on the louvers, the slanted openings for the sound of the church bell. (Temple calls that church “Our Lady of the Louvers.”) On and on the pictures go, like a computer search of images projected rapidly inside her head: a succession of real, individual church steeples, in complete and accurate detail.

As a child, and even many years into adulthood, Temple didn’t realize that most people don’t think this way. But one day, her ability to think in pictures—and the unusual way her autistic brain handled the sounds, sights, and feelings her senses brought in—would turn Temple Grandin into an international hero to both animals and people.

Temple, her family, and teachers all worked hard to overcome her problems with words. She learned to speak so well she now lectures in front of thousands of people all over the world. She has written more than 400 articles and authored ten books. Temple outgrew some of the pain of loud noises, scratchy fabrics, and distracting lights, and learned ways to cope with the discomfort that remained. And thanks to lots of hard work, the baby who wouldn’t let her own mother hug her grew up to be warm and friendly in her own way.