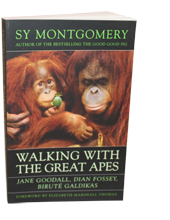 “Daily they made the pilgrimage into the animals’ universe, not only to probe and record, but to enter and join. Perhaps this names the unease that some people feel [about Jane, Dian and Birute]: that these women would be transformed, and then leave us to go wild.”
—from Walking with the Great Apes.

Three women in our time have invented a revolutionary way to conduct the science of primate ethology: dedicating their lives to a single species and living as close to the earth and trees as the great apes themselves. Jane Goodall, studying the chimpanzees of Gombe; Dian Fossey, living among the mountain gorillas of the Virunga volcanoes; and Birute Galdikas, chronicling the lives of Bornean orangutans—all three women used their relationships with their study animals as tools of inquiry, and the results astonished the world.

In researching Walking with the Great Apes, Montgomery walked the same earth as her heroines and, like them, has worked with the same apes in the wilds of Africa and Borneo. In recounting her own experiences along with those of the three brave women whose lives she evokes, she suggests what it is that their mentor, Louis Leakey, saw in them, and in the nature of women, that set Goodall, Fossey and Galdikas among the most celebrated scientists of our age.